Duo is the official mascot of Duolingo. He is a male green owl of an unknown species and is meant to symbolize knowledge, wisdom and learning. In Duolingo it can at times serve as a coach to motivate users to achieve higher learning goals, and can also instruct users on several aspects of the Duolingo website.

In French Duo is a chouette,[1] which is the barn owl. However, barn owls don't have aigrettes, the feathers over the head of many species of owl,[2] and Duo has them.

Duo wears several outfits in different occasions. He sometimes wears an academic gown, a coach Outfit, or a hat. You can buy outfits for Duo on the iOS or Android lingot store.

Duo has recently been used in memes to depict the reminders to practice in a humorous way, mostly in the amount of emails users receive. Duo has been known to call in ballistic missile-strikes on people who do not practice[3], or physically abuse them.[4] The meme has become known as "Evil Duolingo Owl".[5]

The official Duolingo YouTube channel posted a video titled "Introducing Duo Push" on April 1st, 2019, as a nod to the "Evil Duo" memes. In the video, a person dressed in Duo costume is shown stalking users who have not completed their daily lessons in order to "push" them toward their goals. [6] 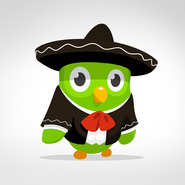 Duo in his coach outfit. 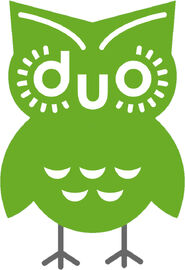 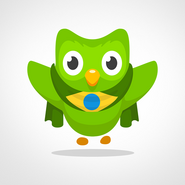 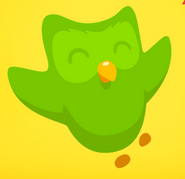 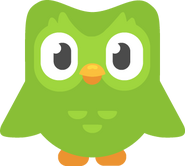 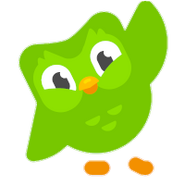 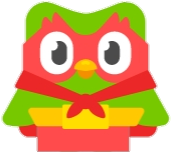 Add a photo to this gallery

Retrieved from "https://duolingo.fandom.com/wiki/Duo?oldid=38525"
Community content is available under CC-BY-SA unless otherwise noted.